This is Scientific American — 60-Second Science. I'm Jason Goldman.
Turns out that for hyenas, it's not what you know, but who you know.
Spotted hyenas live in large, mixed-sex clans with fairly stable social hierarchies—and the females are in charge.
"The matrilineal hierarchies that we see in spotted hyenas are also found in a lot of Old World monkeys."
Michigan State University biologist Eli Strauss.
"It's been perplexing for a long time to a number of people: what forces maintain this system? Because it is somewhat unusual in the animal kingdom."
In some kinds of animal societies, your place in the dominance hierarchy can be explained by physical attributes like body size. But in other animals, dominance rank can be acquired through things like age or nepotism. 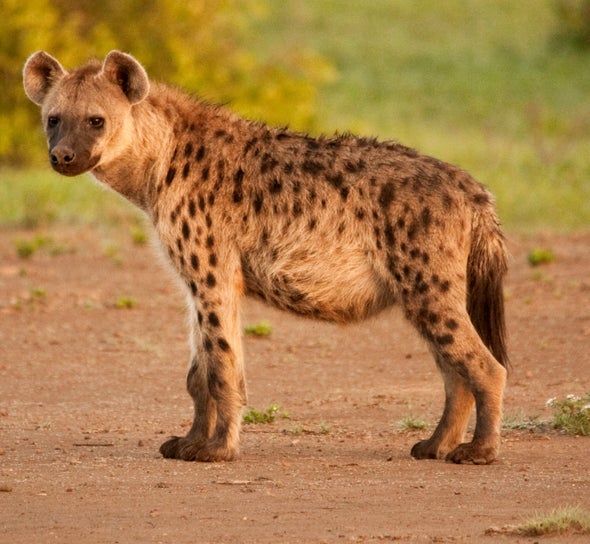 Strauss and colleagues collected data about five generations of four groups of wild spotted hyenas in Kenya that they observed over a 27-year period. And the researchers saw multiple instances in which a smaller hyena came to dominate a larger one. They've even seen severely wounded hyenas become dominant to healthy ones. The results are in the journal Proceedings of the National Academy of Sciences.
Given those examples, it would seem that rank in spotted hyenas is fairly arbitrary. But it turns out that what researchers call "rank reversals" happen only rarely in this species—just 14 percent of the time. So how does it stay so stable over time?
"They're systematically related to the coalitionary support that we observed...So females who had stronger coalitions with their top allies were more likely to increase their social rank."
Spotted hyenas could only climb the social ladder if they were able to maintain a strong alliance.
"The social bonds of these animals are really very fundamental in establishing the structure of their societies."
In other words, the strength of relationships is what puts one hyena in its group's spotlight.
Thanks for listening for Scientific American — 60-Second Science. I'm Jason Goldman.