And Zeus heard him and sent his eagle, his favorite bird, as a sure sign.

Then the old man mounted his chariot in haste, and with a herald drove forth from the palace.

When Priam came to the tent of Achilles, he leaped down from the chariot and went to the tent. 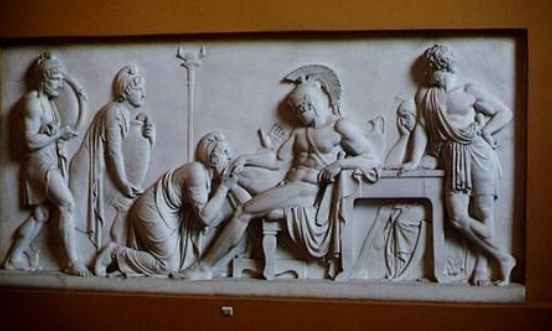 The king fell on the ground before Achilles, clasped his knees, kissed his hands, and spoke:

"Think of your father, godlike Achilles, and pity me. Many valiant sons I had, but most of them are dead,

and he that was best of all has been slain by you. I have come to ransom him. Have pity on him and on me."

These words stirred the heart of Achilles. He stood up before King Priam, and spoke:

"How did you dare to come? You cannot raise your son from the dead."

But Priam answered, "Let me ransom Hector, my son, and look upon him with my eyes. Then may the gods grant you safe return to your fatherland.

If you are willing to let me bury Hector, let there be a truce between my people and the Greeks.

For nine days let us mourn, and on the tenth we will bury him, on the eleventh raise a great tomb above him,

and on the twelfth we will fight again, if fight we must." And Achilles answered, "Be it so."

Wailing and weeping, Priam and the herald took the body to the city.

A daughter of Priam was the first to see her father and the herald with the body on the litter,

and she cried, "Sons and daughters of Troy, go to meet Hector, if ever you met him with joy as he came back in triumph from battle."

At once there was not a man or woman left in the city. Andromache led the way, and the queen and all the multitude followed.

They took Hector to his home, and the minstrels mourned while the women wept aloud.

Last of all came Helen, and cried, "Many a year has passed since I came to Troy — would that I had died before!

Never have I heard from your lips one bitter word. Therefore, I weep for you;

no one is left in Troy to be my friend. All shun and hate me now."